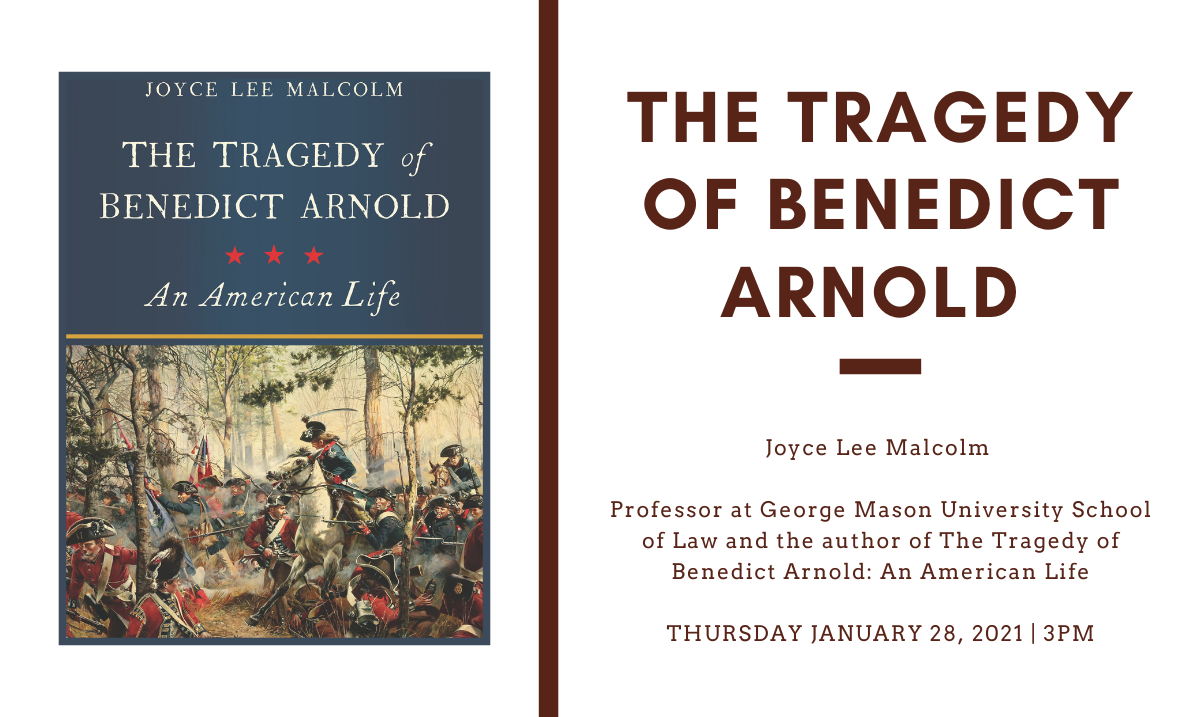 In collaboration with the Connecticut League of History Organization, the Norwich Historical Society is sponsoring a free virtual winter lecture series based on topics from our Walk Norwich Trail system (walknorwich.org). The four-part lecture series is free and open to the public. The lectures will be recorded and available on our website and social media platforms for on-demand viewing.

The first lecture in our virtual winter lecture series will focus on topics from the Benedict Arnold Trail. Benedict Arnold is often remembered for his infamous betrayal of the patriot cause during the American Revolution, but what led this brilliant military commander to shift his allegiance so drastically? Joyce Lee Malcom, author of The Tragedy of Benedict Arnold: An American Life, explores Arnold’s complicated life—from his troubled childhood in a pre-revolutionary America to his wartime military exploits and contentious relationship with the Continental Congress—to provide an illuminating portrait of a man whose name is often synonymous with the word “traitor.”

The lecture will be held Thursday January 28, 2021 at 3:00pm via Zoom. The lecture is free and open to the public, but pre-registration is required.

This webinar is offered in collaboration with the Connecticut League of History Organizations. For more information about CLHO, please visit www.clho.org.

Please click the button below to register for the lecture.

Joyce Lee Malcolm is a constitutional scholar focusing on individual rights and war and society.  She is Patrick Henry Professor of Constitutional Law and the Second Amendment, emer. at Antonin Scalia Law School, George Mason University, a member of the National Council on the Humanities, and the author of eight books and numerous articles.  Her award-winning book, The Tragedy of Benedict Arnold: An American Life, published by Pegasus Press in 2018 was praised in The Washington Post as “a fine biography, the best in recent memory.”

Peter’s War: A New England Slave Boy and the American Revolution, published by Yale University Press, tells the dramatic story of Peter born into slavery in Massachusetts and sold as a toddler to a childless white couple in 1765.  Peter later fought for the patriot cause. To Keep and Bear Arms: The Origins of an Anglo-American Right, published by Harvard University Press, was cited several times in the Supreme Court’s landmark Second Amendment case District of Columbia versus Heller.  Guns and Violence: The English Experience, was also published by Harvard Press.  Her essays have appeared in the Wall Street Journal, The Financial Times, The London Telegraph, The Boston Globe, The Philadelphia Inquirer, BBC News online and she has been the guest on numerous radio and TV programs.

History remembers this proud, talented, and conflicted man solely through the lens of his last desperate act of treason. Yet the fall of Benedict Arnold remains one of the Revolutionary period’s great puzzles. Why did a brilliant military commander, who repeatedly risked his life fighting the British, who was grievously injured in the line of duty, and fell into debt personally funding his own troops, ultimately became a traitor to the patriot cause? Throughout, Malcolm weaves in portraits of Arnold’s great allies—George Washington, General Schuyler, his beautiful and beloved wife Peggy Shippen, and others—as well as his unrelenting enemy John Adams, British General Clinton, and master spy John Andre. Thrilling and thought-provoking, The Tragedy of Benedict Arnold sheds new light on a man—as well on the nuanced and complicated time in which he lived.