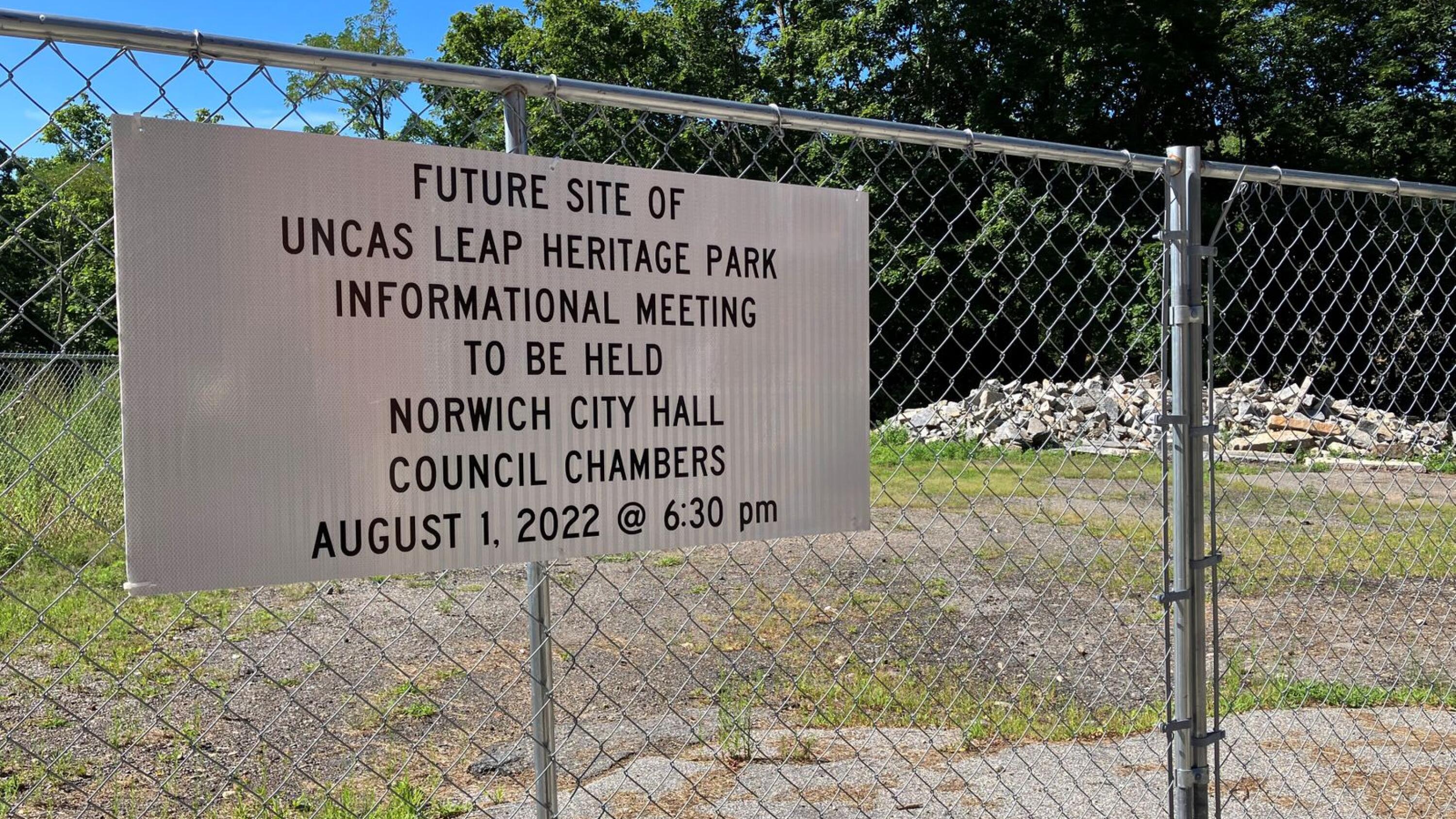 A construction fence stands at the entrance to the future Uncas Leap Heritage Park along the Yantic River in Norwich on Sunday, July 31, 2022. Granite blocks piled on the ground will be configured into a stone amphitheater in the park. (Claire Bessette/The Day)
Published: 2022-08-03 16:41:19
By Claire Bessette Day staff writer
c.bessette@theday.com

Norwich ― Plans for the $2.4 million Uncas Leap Heritage Park are taking shape, including a staircase to an overlook at the waterfall, snaking pathways, a second overlook at the rocky gorge, an amphitheater and mill ruins to explore.

The group hopes to finish the design, have permit approvals and advertise for bids in February for construction next spring. If that schedule holds, the park could be completed by November 2023.

The city already paid for and completed some work on the project, building a parking lot adjacent to the park property on Yantic Street and completing a partial demolition of a granite early 19th century mill building.

The ruins of the small mill will be hollowed out, with a pathway through the building lined with a decorative fence and interpretive panels describing the area’s rich history in the early industrial period.

Granite blocks from the mill walls now are piled up on the park property. The plan calls for them to be assembled into a stone amphitheater, or “story circle,” as Michael Doherty, principal landscape architect for SLR called it.

Doherty and SLR landscape designer Lan Ma both have been working on the proposed Uncas Leap park since it was conceived in 2016, without a clear funding source. Doherty said they are excited to see the project come to fruition with construction in sight.

Lan described elements that have changed since the park master plan was unveiled in 2018. The group eliminated plans for a kayak tie-off at the base of the gorge and steep pathway up to the park. The topography at the entrance to the mill ruin will require a staircase in front, moving handicapped access to another point in the pathway.

The level lawn between the pedestrian bridge and the Central New England railroad bridge and tracks offers views of the river, the upper Yantic Falls in the distance and the railroad bridge. Lan said a picnic area with benches is proposed for the lawn.

Across Yantic Street from the mill ruins, an old, steep, concrete staircase leading down from Sachem Street will be replaced with a modern safety code-compliant staircase with new railings. The staircase is closed for safety reasons, but people still use it, Doherty said.

An idea to create a switchback handicapped ramp down the steep slope was abandoned, Doherty said, as it would require extensive excavation and supports. The Mohegan tribe, which has been meeting with the Norwich Historical Society in partnership on the park plan, has expressed concern that the area above the hollow was an extensive tribal burial ground. Tribal representatives have asked for minimal disruptions to the soil on the slope to avoid any potential disturbance to burial sites.

Doherty said the new staircase can be built without digging into the soil on the slope.

SLR will spend the next several months completing the designs and getting the project ready for construction bids. Doherty said the group will submit applications for inland wetlands and planning and zoning permits in late August or September.

The group will present options to city officials on materials and colors for construction materials and lighting for the park, details Doherty said, “can make the park shine,” while avoiding over-designing the park and disrupting its historic character.