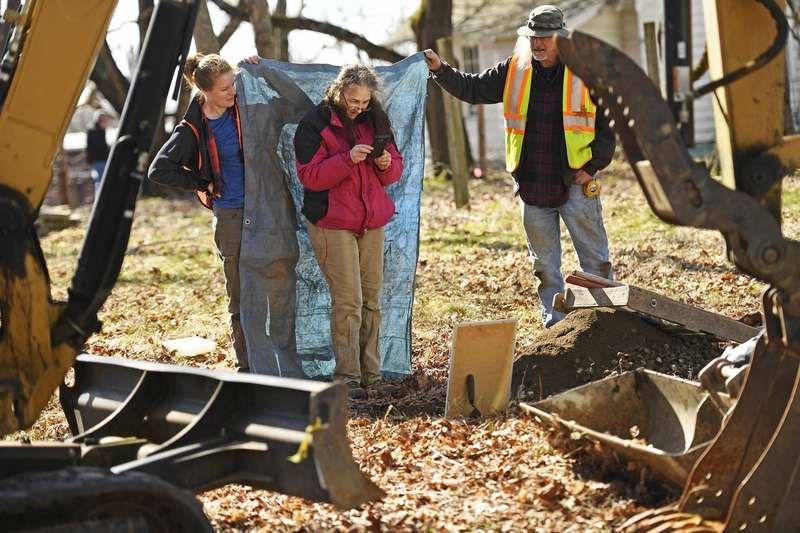 Norwich — Crews from the archaeological firm Historical Perspectives Inc. drilled several test pit holes in the rear of properties at 61, 63 and 65 Town St. on Thursday before construction of a proposed Burger King restaurant on property that abuts a colonial burial ground.

Developer Amaral Revite was ordered to conduct the archaeological study as a condition of the project approval by the Commission on the City Plan in October 2018. Historic preservation advocates expressed concern about the historic cemetery at the back of the properties.

Gravestones stand within inches of the stone wall that divides the property, and local historians say that wall was built much later, in 1870, causing concern that it does not mark the accurate edge of the burial ground.

William Sweeney, local counsel for the Providence-based developer, said Thursday the dig is “phase 1B” of the archaeological study, with phase 1A being a review of written records of the properties, which he said showed no evidence that the burial ground extended beyond the wall.

The test pits will be focused on the rear portion of the properties to see if there are any archaeological deposits in the area, Sweeney said. “If they find anything, it may or may not lead to further review,” he said.

The study is expected to be completed in a week, and if nothing significant is found, the developer will proceed with demolishing the three abandoned homes and move forward with site development to construct the Burger King, Sweeney said.

City Planner Deanna Rhodes visited the property during the test pit work Thursday to examine the start of digging. She told crews that while the study is going on, Amaral could submit building design drawings for review by city building inspectors, who are working remotely during the COVID-19 crisis and are doing plan reviews.

Along with agreeing to the archaeological dig, which was recommended by the state archaeologist, Amaral Revite reached a settlement with the Norwich Historical Society in November 2018 to redesign the project to allow for a wider construction buffer zone between the restaurant and the burial ground.