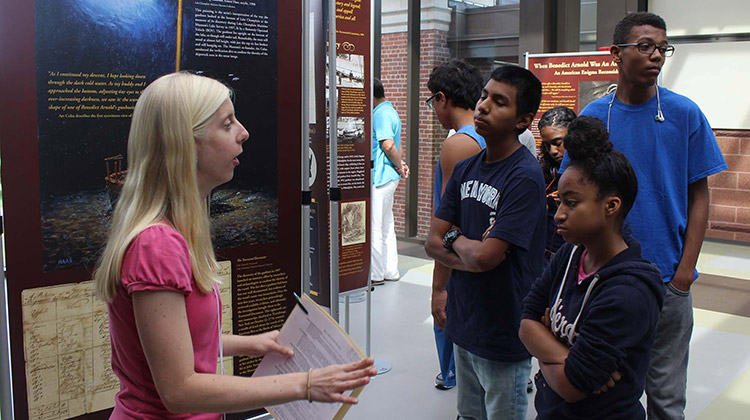 NORWICH – Like many other visitors to Norwich Free Academy’s exhibit about Benedict Arnold, Dylan Marano and Jonathan Boxley wanted to know one thing: Why did he become a traitor?

But the incoming NFA ninth graders soon found themselves immersed in the remarkable story of how Arnold, as commander of one of America’s first naval fleets, fought a superior British force at the Battle of Valcour Island in October 1776.

For the past week, more than 150 students enrolled in NFA summer enrichment programs have toured the exhibit through collaboration between the school and city’s historical society.

“We were excited at the opportunity, so when she met with us, we jumped at the chance,” Leo Butler, NFA’s diversity director, said. “It’s a wealth of knowledge for these kids we didn’t even think about when the summer started.”

Though Valcour Island ended as a loss for the colonies, it delayed by a year the British effort to attack the northern front and set up an American victory at the Battle of Saratoga in October 1777 that led to America’s alliance with France.

“The exhibit was very nice. I learned about Benedict Arnold in school, but this taught me stuff I didn’t know before,” said Dylan, a Norwich resident who graduated from Kelly Middle School this summer.

“Key to Liberty: The Revolutionary War in the Champlain Valley” has been on display at NFA’s Slater Museum since May, on loan from the Lake Champlain Maritime Museum in Vergennes, Vt.

Open to the public, the detailed poster boards recount the lead up, battle and aftermath at Valcour Island and ends with a synopsis of Arnold’s treachery.

But on Thursday, it fell to NFA alumna Regan Miner, projects coordinator for the Norwich Historical Society, to present the enigmatic Arnold in both contexts: Hero and villain.

“We recognize the fact that he did betray the country, but he also made important contributions before that,” Miner said. “I try to be unbiased and present the facts and let them make their own decision.”

Eleven of the 15 ships in Arnold’s fleet were lost at the battle, and Arnold ordered the rest to be sunk so they wouldn’t be taken as spoils or war or reveal military secrets to the enemy.

The takeaway on Thursday was that Arnold shouldn’t have switched loyalties, and was a great tactician whose actions strengthened the young American forces.

Jonathan Boxley, who lives in Brooklyn, said he enjoys history and found the NFA visit fascinating.

“Kids I think like certain things in history more. Wars are interesting,” he said. “I like looking at old discoveries.”

Miner has used her platform as tour guide to shine a light on other key figures in early U.S naval history, including Capt. Robert Niles.

Born in Groton in 1734, Niles commanded a schooner called “The Spy” that carried the country’s treaty with France to Benjamin Franklin in 1778. Niles died in 1818 and is buried in Norwich.

Butler said NFA hopes to build on its relationship with the historical society and other civic groups on future partnerships to benefit summer learning programs on campus.

“This is a great example of collaboration within Norwich. And it’s education clothed in art. Some of our students are rarely exposed to that,” he said.