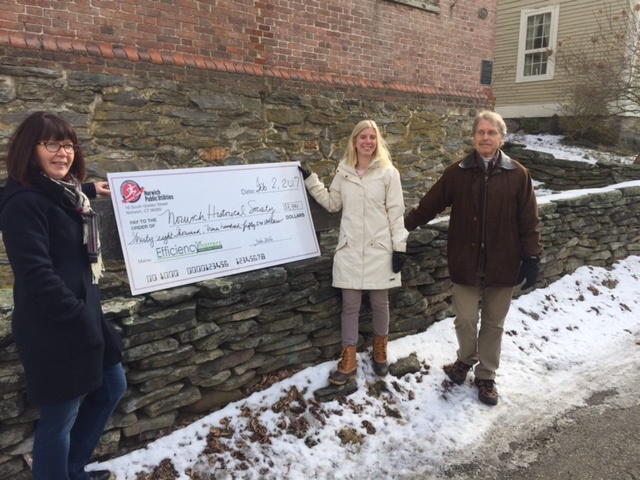 At a glance : The Historical Society received $38,951 to perform stabilization work at the 1789 East District Schoolhouse. Work should be completed by October. The society plans to eventually use the space as an educational resource for students and the public.

NORWICH – A historic one-room schoolhouse in Norwichtown will get a new lease on life thanks to efforts by the Norwich Historical Society and funding from Norwich Public Utilities.

Representatives from both organizations met Thursday at the East District Schoolhouse on Washington Street to announce a $38,951 donation from NPU for help in restoring the brick and stone schoolhouse, which was built in 1789 but has been unused for 40 years. The Historical Society plans to eventually fully restore the building and recreate an authentic late 18th century schoolhouse interior and exhibit space. The goal, Historical Society President Bill Champagne said, is to use it as an educational resource for students and the public. Work will include stabilizing the exterior, removing mold, improving ventilation and restoring window frames and sashes. The work is set to start in March and be completed by October.

“Obviously there’s mold in here, the windows and frames are rotting, there’s structural issues,” Champagne said. The society will work with a historic architect to perform the work.

“Everything we do we want to do carefully and historically accurately,” he said.

“We applied and were approved, and are delighted to work with the Historical Society to bring this treasure back to life,” NPU spokesman Chris Riley said. “This is a terrific building with a really interesting history.”

The building will need work beyond what the funding covers, but there’s enough money from NPU to stabilize it, Champagne said.

“The Neighborhood Assistance Program is a tax credit program, so it’s not costing NPU anything, it’s not costing ratepayers anything. It is putting money toward a project such as this in lieu of taxes they would have been paying anyway,” he said.

The schoolhouse was used to teach spelling, geography and math to boys and girls, a progressive approach for the time. Its most notable student was Lydia Huntley Sigourney, a renowned poet and popular writer in the 19th century.

“She was a great writer in the 19th century,” Champagne said. “Sigourney Street in Hartford is named after the family.”

The last major work done on the schoolhouse was in 1970 when a historical museum was planned but didn’t materialize, according to Champagne. When he lived down the street about 25 years ago, Champagne, his wife Patrice and neighbors Art and Ann Lathrop did some repairs to the windows, he said.

The Historical Society has benefited from the Neighborhood Tax Assistance Credit Program in the past. In 2016, the society and Leffingwell House Museum each received $8,852 from Jewett City Savings Bank. The society used the funds to restore the windows of the Dr. Daniel Lathrop Schoolhouse and to install a heating, cooling and ventilation system. Leffingwell Museum used the funds for interior storm windows and other energy upgrades.

NPU and the society partnered in 2015 to upgrade lighting at the Lathrop Schoolhouse for the Norwich Heritage and Regional Visitors Center. NPU also did an energy audit for the Leffingwell House in 2014.

Historical Society consultant Regan Miner will be the project manager for the East District Schoolhouse work. Miner also managed the work on the Lathrop Schoolhouse.