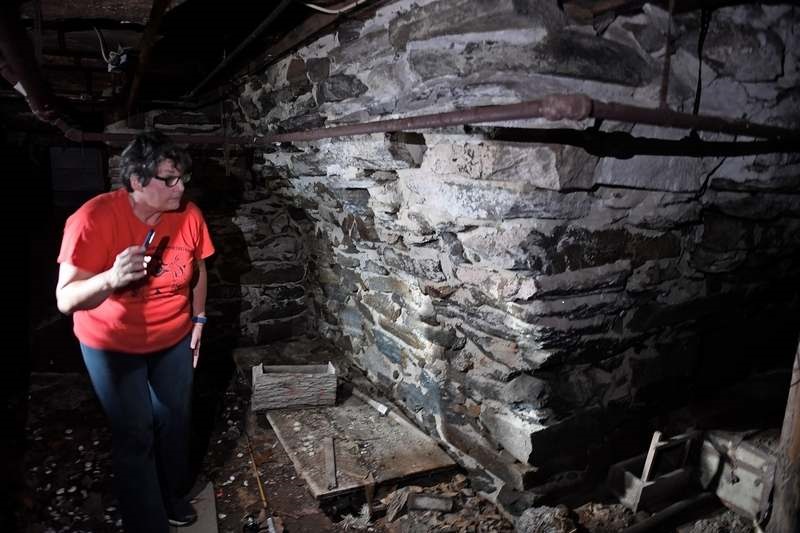 Norwich — If not for quick and desperate actions of the Norwich Historical Society and descendants of an original Norwich settler, there would have been a vacant lot at 232 W. Town St. across from a Charter Oak Federal Credit Union branch.

The rundown Hugh Calkins House, a small white cape, had been slated for demolition, the lot to be marketed for development by the former owners. Historic preservation advocates and the Calkins Family Association rallied support to purchase the house for $120,000 in June 2020.

The association, with members throughout the country, plans to restore it to its early Colonial-era appearance and open it as a museum, genealogy center and library. Association Vice President Melissa Calkins of Quaker Hill has been doing genealogy research for 10 years and is in the process of becoming a certified genealogist.

Calkins said once the house is open, she plans to teach genealogy to raise money for the ongoing work. The nonprofit association is accepting donations and is seeking volunteers to assist with the restoration. Contact Calkins at mjcalkins817@gmail.com for information.

The work has just begun, but the association will hold an open house at 3:30 p.m. Saturday on the grounds to celebrate the purchase and a $20,000 State Historic Preservation Office grant to hire a historic preservation architect. A GoFundMe page has raised $5,422 of a $9,862 goal as of Thursday.

About 45 Calkins family members from across the country will attend Saturday’s open house as part of a four-day family reunion tour of historic sites connected with early Calkins ancestors in Norwich and New London, including noted local historian and author Frances Manwaring Caulkins.

Melissa Calkins, local cousins, friends and local contractors have been working for the past year to clean the yard, clear brush and clean inside the Norwich house. One relative even conducted a paranormal investigation; nothing of note was found during the investigation, but the relative thought she saw something in an image afterward, Calkins said.

Calkins said the group has been careful not to disturb original wood beams, brick and stonework while removing obviously modern features. She tore out nearly all of a yellow shag carpet from the second floor. “I’m pretty sure that wasn’t there in the beginning,” she joked.

The roof had leaked, and a smell of mold permeates the house. Calkins removed mold-covered modern wallpaper, along with linoleum, rugs and debris.

Because of the mold and uneven floors, Saturday’s open house will be restricted to the yard, with peeks inside from windows and doors.

The association used the $20,000 grant to hire Spencer Preservation Group of Nahant, Mass., to design the restoration. The group will do tests to determine the accurate age of the house. Calkins said the association has information that it dates to the 1660s, but Norwich Historian Dale Plummer has estimated the current house at early 1700s.

Norwich Historical Society past President William Champagne, a real estate agent specializing in historical homes, said it appears to be a 1760s house. “I think it’s wonderful that the Calkins family is coming to Norwich,” he said, “and certainly there’s tons of history with that family and with that particular house.”

The restoration will remove later additions, including dormers, a rear first-floor room and storage room. Calkins wants to restore the large open hearth fireplace in the main first-floor room. The fireplace had been shrunk to a small opening, but the stone oven to the left is intact. She found an intact antique cast iron kettle with a spring wire handle.

“The house is in a sad state of affairs,” Calkins said.

“If it weren’t for Regan, that house probably would have been punched by the bulldozer,” Champagne said. “Regan at the 11th hour contacted the Calkins Family Association. Without them, it would have been demolished.”

Miner said saving the house was “a huge win for Norwich history,” especially for the Bean Hill Historic District.

“The Norwich Historical Society is so excited that the Calkins Family Association purchased the property last year,” Miner said. “And we’re excited to see the property restored and their plans come to fruition.”