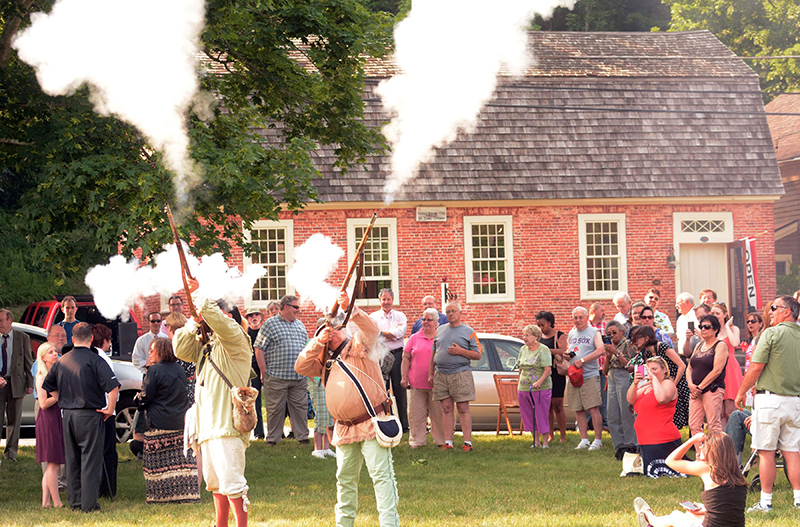 NORWICH — Paula Rosenberg-Bell has waited a decade to welcome her new next door neighbor.

“We’re getting back things we thought we would have 10 years ago when we moved to Norwich,” Rosenberg-Bell said as she watched a large crowd flow through the newly christened Norwich Heritage and Regional Visitors’ Center in the Daniel Lathrop Schoolhouse at 69 E. Town St., which abuts her property. “And I love seeing these buildings fixed up.”

Bringing the center to life was a venture years in the making that brought together more than a dozen local heritage groups, city government and state historical agencies, all with one goal in mind: to tell Norwich’s history.

It was paid for with $85,000 from the city’s Sachem Fund and a $35,000 grant from the state Department of Economic and Community Development.

“Norwich’s heritage is one of its greatest assets, but the stories have not been well told yet,” Historical Society President Bill Champagne said during a Friday evening ceremony to officially open the facility.

The site is anchored by a 10-panel exhibit highlighting Norwich’s history from the 17th to 20th centuries, and includes promotional materials for historical attractions across the region.

“Without Eastern Connecticut, there is no other place to go in the state. We have the best attractions, and this is why we’re all here today,” state Sen. Cathy Osten, D-Sprague, said. “This is just one more piece in the puzzle that allows us to get out that Eastern Connecticut is a destination.”

Regan Miner, projects coordinator for the historical society, spearheaded the creation of the center.

Built in 1782 and one of the state’s oldest surviving brick schoolhouses, the Lathrop building emerged as an ideal site for the center. And with its proximity to the Norwichtown Green, officials plan to tie it in with larger events such as colonial re-enactments.

The schoolhouse has undergone a major renovation for the center, including the installation of new doors and windows. A heating and air conditioning system is also planned.

Another facet of the center will be the development of themed walking trails pertaining to Uncas Leap and Benedict Arnold.

“I was fascinated from the minute I heard about it, and said I was fully supportive of the idea if they made sure all the groups that deal with history work together, and you can see there’s going to be a great result from all of their hard work,” Mayor Deb Hinchey said. “It’s an incredible endeavor.”

State Rep. Doug Dubitsky, R-Chaplin, said he was pleased the city found a way to breathe new life into one of its landmarks.

“There was a time when old buildings like that were just knocked down, and thanks to people that really cherish our history, thankfully we have this and many others around Eastern Connecticut that people can come and see,” he said.

“History is probably the best thing that Norwich has going for it, and this is the start of getting the ball rolling, getting Norwich’s assets out to the world,” she said. “I’m extremely proud for Norwich, and I think everybody should be as well.”