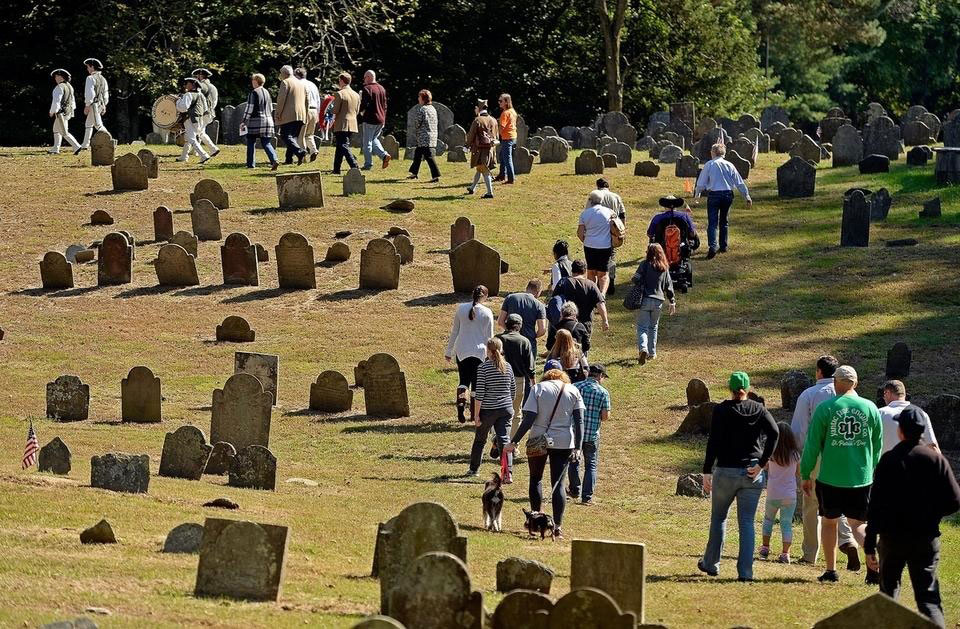 Members of the Colchester Continentals fire and drum corps lead a procession from the Norwich Historical Society’s third annual History Day into the historic Norwichtown Cemetery for a wreath-laying ceremony at the grave of Samuel Huntington on Sunday, Sept. 30, 2018, on Norwichtown Green. The society and the developer of a proposed Burger King adjacent to the burial ground have reached a settlement to create a historically appropriate buffer between the colonial cemetery and the fast food restaurant planned on Town Street. (Sean D. Elliot/The Day)

Norwich — The developer of a controversial Burger King abutting the historic Norwichtown colonial burial ground announced a settlement Wednesday with the Norwich Historical Society that calls for the developer to enhance the buffer zone between the properties and to donate additional plantings to create buffers behind other commercial properties on Town Street.

The Burger King project on Town Street, proposed by Providence-based Amaral Revite Corp., was approved by the Commission on the City Plan in October following a lengthy and contentious public hearing. The Norwich Historical Society had considered appealing the approval to court but the settlement calls for the society to “drop all opposition” and for the parties to work “cooperatively” to design an enhanced buffer zone behind the Burger King development.

Attorney William Sweeney, who represents Amaral, said Wednesday the two parties will meet next week to discuss the details of the enhanced buffer zone. The permit approval calls for a buffer ranging from 20- to 40-feet-wide at the rear of the property, retaining the elevated ground as a natural buffer, as well.

But Sweeney said the original plan called for an aluminum vertical rail fence at the rear. In the settlement, Amaral will agree to install a more “historically appropriate fence,” with plantings of heirloom native 18th and 19th century trees and shrubs. Exact materials have not yet been selected, he said.

Additional plantings will be donated for either the burial ground property, which is owned by the city, or neighboring abutting properties to be used with permission of those owners to improve the buffer around the burial ground.

Sweeney said he was pleased that the Historical Society reached out to the developer to reach an agreement. He said the developer has notified the city planning office, and city officials are willing to work with the parties on the enhanced buffer.

Historical society President William Champagne said Wednesday the developer has agreed to work with the society’s historic landscape architect Thomas Elmore of Suffield, who will tour the property next week and make recommendations about the fencing and appropriate plantings.

“The major concern for the Historical Society, the neighbors, and several heritage groups is the buffer between the development and the Burying Ground,” Champagne said in the news release announcing the settlement. “We greatly appreciate the developer working with us and with our landscape architect who is experienced in working with sensitive historical sites.”

Champagne said the society has not yet contacted abutting property owners, including Dime Bank and United Community and Family Services — whose properties have virtually no buffer near the burial ground — to ask permission to create buffers. Champagne expects property owners to cooperate with the effort.

Champagne said it’s also possible that the Norwichtown burial ground enhancement project could spark support for improving buffers and protections for other historic cemeteries in the city.

“This also has raised the awareness by a lot of people who have contacted us about trying to safeguard all burying grounds, because there are others that need help, need protection,” he said.